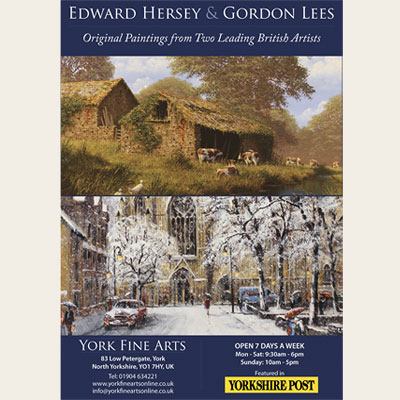 Town and Country: A Celebration of British Landscapes by Gordon Lees and Edward Hersey.

York Fine Arts is delighted to present the newest art exhibition ‘Town and Country: A Celebration of Treasured British Landscapes’. The exhibition brings together an exceptional collection of original paintings from two leading British Artists, Edward Hersey and Gordon Lees, whose work consistently captures and preserves the classic charm of Britain’s most beloved towns and landscapes from Yorkshire to The Cotswolds.

For the discerning art collector or first time buyer, the exhibition is a chance to view an exclusive collection of work from two of the gallery’s most recognised artists. From Edward Hersey’s warming, in situ farmhouses to Gordon Lees’ tranquil winter village scenes, the exhibition features a wide range of paintings to suit a variety of tastes.

Renowned for his distinct style and attention to the details of the British countryside, Edward Hersey has forged a loyal international following. Painting a fine line between realist and idealist, Hersey’s work reflects the rustic beauty
of pastoral life with simultaneous subtlety and finesse. His application of mood and lighting has made him one of the most highly sought after traditional painters of his generation.

Nostalgically capturing the beauty of British landscapes and towns, Gordon Lees is an established international investment favourite. His romantic style enables him to capture the idyllic atmosphere of Britain’s towns and villages, and to reflect the traditional values of a rural England now so sadly missed. It is believed that Gordon's work was the inspiration for the trademark village scenes of Thomas Kinkade, one of America's most prolific artists, who recognised Gordon as 'The Original Master of Light'. Following Kinkade's passing in 2012, Gordon Lees' work has shown a surge in cross Atlantic sales.

All paintings at the exhibition are available to purchase and range from £660 to £24,885. Included is the spectacular, specially commissioned Cotswolds scene ‘Summer Farm’ by Edward Hersey. A selection of signed limited edition prints by both artists is also available from £88.

For press enquires including images, please telephone Deanna Dawkins on 01904 634221