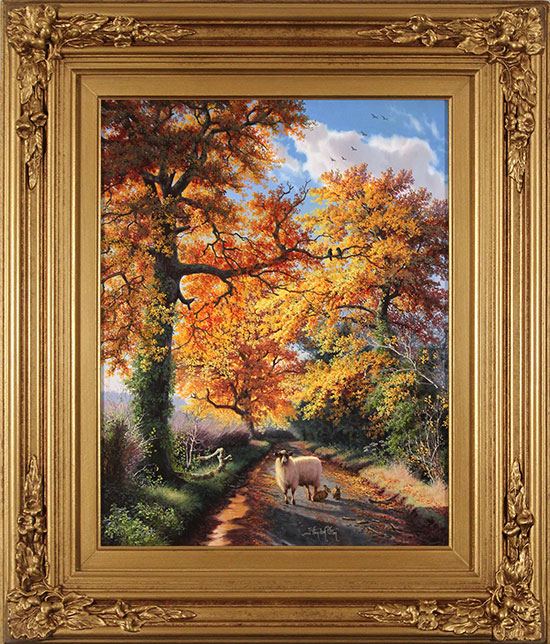 Daniel Van der Putten was born in a small farming village near Leyden in Holland. Initially he worked for his father in the family horticulture business, but found that his desire to paint was too strong to ignore. This desire and ability, no doubt, was inherited from his mother, and also his aunt who was a professional portrait artist and exhibited mainly in Holland and America.

On a visit to Australia, Daniel met his Scottish wife and on their return went to live in Scotland. They worked together from the start and researched and studied various techniques of painting primarily those of the Great Dutch Masters, giving attention to observing the natural landscape wherever they travelled. Daniel was particularly inspired by the British landscape, and shortly after moving down to England became a full-time painter.  His desire was to faithfully depict the British countryside in its differing seasons. Daniel’s paintings reveal a unique style of his own. He is interested in showing the vast array of colour, light and shadow which appears in nature and his detailed technique reaches perfection in his treatment of skies and trees.

Daniel is completely self-taught, and although he greatly admires the work of another Leyden artist, namely Rembrandt, he was truly inspired by the finest Dutch landscape painters of the Dutch Romantic period. It is gratifying to note that a contemporary artist can translate this inspiration into original work of his own and attain such a high standard of achievement.

Daniel Van der Putten’s paintings cover a wide range of different moods and seasons and have a light and intensity that very few artists can achieve. His work has consistently proved to be a constant source of enjoyment for private collectors all over the world. An artist of international reputation, his work has been shown with the Royal Institute of Oil Painters and in one-man exhibitions throughout England, Scotland, Canada, Taiwan and across the United States of America.