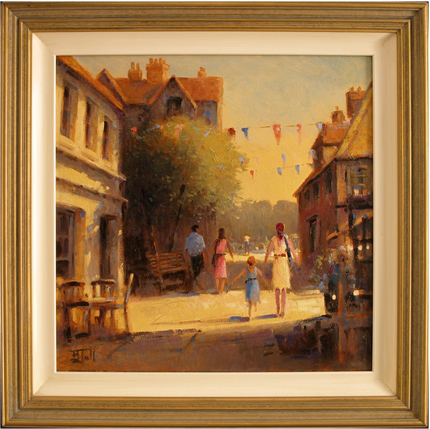 Born in Greenwich, Brian Jull is a self taught artist. At the age of 18 he joined the Merchant Navy and during this time met his wife. After a visit to the Maritime Museum, he felt a strong desire to take up painting. His early work was very much influenced by the artist William Turner who was able to brilliantly capture the light and scale of any subject. So inspired by Turner’s work, light became the key component of his paintings and studies.

As he developed as an artist, he began to experiment with impressionism and studied the work of Monet, Seurat and Renoir while traveling through Paris and Giverny. Much like the 19th century impressionists, he painted ‘in situ’ or onsite. His recent work is inspired by Seurat and depicts “leisurely pursuits” such as a walk in the park or a market scene just as the sun is rising. His technique is still concerned with light and contrast, but has evolved from being detailed to increasingly looser and textured. Brushwork is important to him as he likes to “express character through the texture of the paint on the canvas.”

No artworks from Brian Jull are currently available, please contact the gallery for future availability