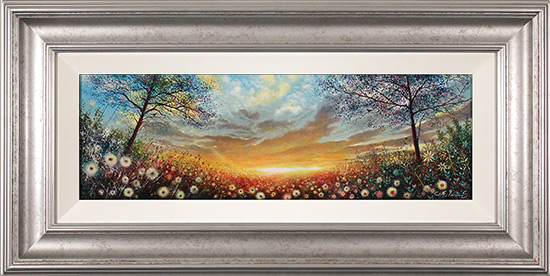 Exuberant and invigorating, Chris Parsons’ landscapes overflow with blazing light and vivid hues, culminating in a crescendo of natural extravagance. Stradling the border between reality and a heightened, ethereal world, Chris’ paintings offer a full sensory experience and space for the imagination to roam.

Born in Bristol in 1969, Chris Parsons began to draw and paint at an early age, having been inspired by the books and comic books that populated his childhood. He says, “I had an instinctive feeling that this would become part of my life.” Following this instinct, Chris pursued art throughout his education. After completing his A levels in art and design, Chris went on to complete an Arts Foundation Course in 1989, before enrolling to study Graphic Design in 1990.

After completing his degree in 1992, Chris worked a variety of jobs while simultaneously taking on an array of commissions in his free time, including sign writing, magazine illustrations, murals for children’s playrooms and artwork for computer games. In 1998, Chris began showing his work at St Nicholas Market and it was not long before his work was shown and selling at a local gallery.

Since then, Chris has continued from strength to strength. His work has been published as prints by one of the country’s leading publishers, Washington Green. And in 2000, Chris exhibited with The Guild of Aviation Artists at the Carisbrooke Galley in London, showing his work alongside the likes of Gerald Coulson, David Shepard and Keith Woodcock. With and ever-growing following, Chris continues to garner acclaim and captivate collectors both at home in the UK and overseas.