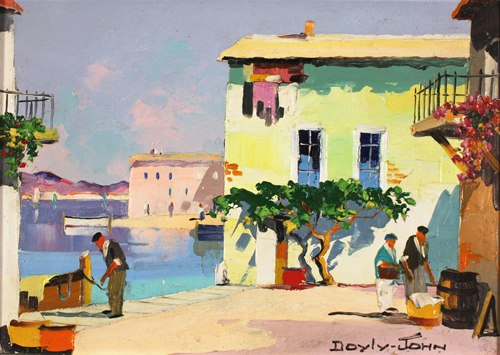 Before becoming an artist, he was quite adventurous and travelled the world, taking many jobs and assignments. These included working on a Japanese tramp steamer, life-saving in Colombo and pearl-fishing in Manila and "a bit of hush-hush gun-running". He also served for eight years with the police in Tanganyika, rising to district commissioner. When war broke out in 1939, he returned to England and joined the Military Police. He served in Africa, the Middle East and later with Civil Affairs on the continent.

In 1945 he was badly wounded by a bomb, reportely a V2 rocket. This resulted in D'oyly John being temporarily blinded and needing a long period of rest to recuperate from his injuries. During this time, he was introduced to painting by his friend, the artist and teacher, Edmund Fearnley-Whittingstall. Having been encouraged to paint by him, D'oyly John adopted a palette knife technique gleaned from a Belgian artist seen on holiday. He later picked up tips from the Nice artist Paul Negeli.

When KLG, the sparking plug firm he worked for was taken over, D'oyly John and his wife Joan moved to South Africa. It was at this time he began painting seriously with interest from the British dealer Frost & Reed. The D'oyly Johns lived in Cannes for several years before settling in England, but he continued to tour the continent as Gough's Gallery of Bognor Regis. In 1965 he had a very successful solo exhibition in Bognor Regis, selling his work to art dealers from around the world, including Stacy-Marks, Aldridges, and Frost & Reed. Queen Elizabeth visiting Africa as Princess Elizabeth, found her Treetops hotel decorated with several D'oyly Johns and acquired his work for the Royal Collection.

Some of his wonderful paintings of the south of France and of Venice were reproduced as prints, often high in the Printsellers' Association's popularity poll. Brighton became his home before eventually settling in Rottingdean, on the south coast. He was dubbed the Van Gogh of Sussex, after his colourful past and as a tribute to his similar style of painting. A stroke in 1987 incapacitated the artist, partially paralysing him and blinding him in one eye. He died in 1993 and is buried in St Margaret's churchyard in Rottingdean.

Back to the French Riviera. Between Nice and Monaco is the medieval village of Eze, perched like an eagle's nest on a narrow rocky peak, overlooking the Mediterranean Sea. The village is crowned with the ruins of a 12th century fortified castle and is still a pretty village, but now has more tourists and souvenir shops and cafes than in D'oyly John's time. A steep path down connects Eze to the tranquil seaside town of Eze sur Mer. There is now a greater contrast between the ancient village of Eze and the seaside residential Eze sur Mer, with its exclusive beaches, water sports, restaurants and hotels. The artist would spend several months on location painting outdoors and sketching scenes in his pursuit of the perfect spot. During the 1950s and 1960s, he made several trips to the West Indies. The islands of Jamacia and of Trinidad and Tobago feature in his recorded works. Nowadays we would travel to the Caribbean by plane, but in Doyly John's time, he would pay for his passage on merchant ships. The painting below is of Trinidad and shows the typical thick impasto he applied in his work during the 1960s. Text copyright of Paul Mayhew, Philip Kelleway and www.doylyjohn.co.uk

No artworks from Doyly John are currently available, please contact the gallery for future availability