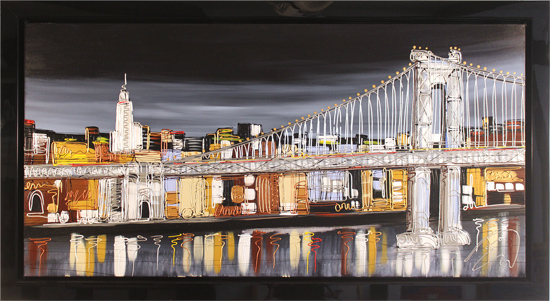 Born in the seaside town of Skegness, Edward Waite took an active interest in art from a young age, spending most of his school hours in the art classroom where he would frequently sketch and paint images of life on the coast.

On moving to Lincoln to study Fine Art at university, Edward was instantly struck by the noise of the city, absorbing himself within the lights and structures of his new surroundings. He began to paint dark, Gothic interpretations of the city's buildings, fascinated by the urgency with which the urban landscape appeared to alter and expand.

Following his graduation, Edward embarked upon a two year journey across the globe, sketching constantly throughout. Over time these sketches evolved into larger scale canvasses as he refined his unique method of painting. It was in a New York diner that the idea of using ketchup bottles occurred to him; a technique that has since come to be the trademark of his paintings.

The fast, fluid style in which he works is evident in each and every one of his pieces, echoing the buzz and bustle of city life.

Edward has already achieved remarkable success, with several sell-out exhibitions under his belt. His bold, dynamic style has captured the attention of collectors worldwide, with many galleries clamouring for his work. Never one to rest on his laurels, Edward continues to travel extensively, always searching for new inspiration.

No artworks from Edward Waite are currently available, please contact the gallery for future availability