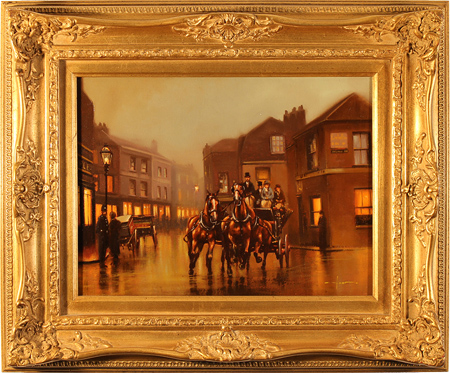 Graham Isom was born in Kent in 1945 and brought up around his father’s riding school, where he first developed his love of horses. After studying at Ravensbourne College of Art he obtained his degree which qualified him, amongst other things, to be a teacher: although he spent the best part of the following year as a groom in stables on Dartmoor. After teaching ‘A’ level students for five years in Dorset, his private commissions increased sufficiently to enable him to devote all his time to painting and for two years he specialised in figure studies, several of which were reproduced by a London publisher. It was not long, however, before he combined his love of animals and knowledge of anatomy to include four legged models.

In 1988 he moved to Somerset and started to produce some of his most successful work. Regular exhibitions throughout the UK and America, together with his acceptance into both American Academy of Equine Art (AAEA) and the Society of Equine Artists (SEquA) have resulted in his work being highly sought after both at home and abroad. Equally popular are the many reproductions of his works in limited and open editions – many of which have become collectors’ items. His paintings are included in both public and private collections throughout the world.

No artworks from Graham Isom are currently available, please contact the gallery for future availability