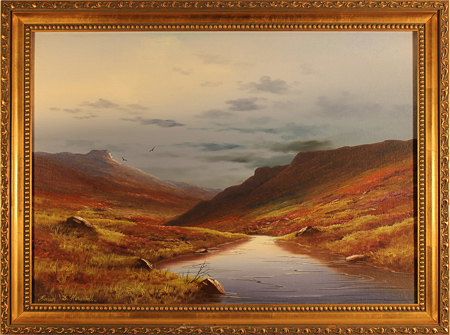 John Horsewell was born on the borders of London and Essex in 1956, son to professional artist Ron Horsewell. This influence of art in his family made it natural for John to pick up a paintbrush. By the time he left school he had experimented with all forms of painting, and had become proficient in pastels, watercolours, acrylics and oils.

Upon leaving school, he entered the world of interior design. Yet he still continued to paint and in his spare time. He began exhibiting his paintings, first locally, and as his reputation rapidly spread, in major cities such as London, Birmingham and Manchester among others. By 1978, he had made the decision to forgo his career in interior design and instead concentrate on his work as a full-time artist.

John's works are painted with great flair, both in colour and execution. He paints with a combination of brush and palette knife, giving his work noticeable texture that quickly communicates to viewers the pleasure of observing his favourite landscapes. His combined style and technique inject his paintings with an air of excitement, inviting the viewer to "walk in" and share the experience.

It is no doubt for this lively and refreshing style that John has experienced such great success is his career. His paintings remain in high demand in the United Kingdom, and can be found in private collections across the globe.

No artworks from John Horsewell are currently available, please contact the gallery for future availability