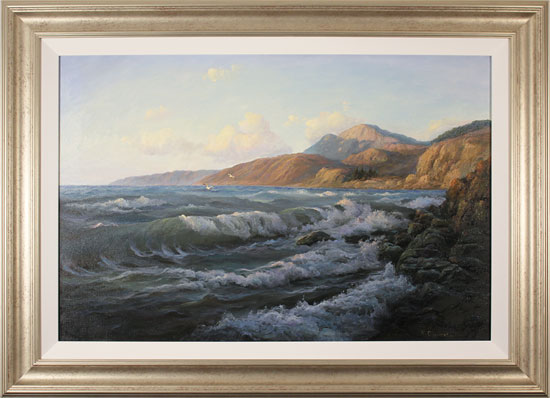 Juriy was born in 1956 in the Crimea in what is now the Ukrainian Black Sea port of Sevastopol, though when he was born and grew up it was part of the Soviet Union.  The Soviets determined to create an artist legacy invested heavily in talented artists.  Admission to an art academy was extremely competitive and required previous training at an intermediate art school or art college.  The official training of an artist lasted at least six years; the first five were designed to challenge and improve technique.  The sixth was devoted to diploma work in producing a sizable, thematic painting.  Juriy completed his training at the prestigious Kharkov, the Ukraine’s second city, University of Art.

Under the Soviets, there were no galleries or auction houses where artists could sell their work; government institutions that had the required “art budgets” commissioned paintings.  To survive, it was important to be invited by the government to become a member of the Union of Russian Artists on a regional or national level.  The artists’ union have survived the communist era and Juriy remains a member of the Artists’ Union of the Ukraine.  After graduation, he worked as a painter and designer in Kharkov where he still has his studio today.

His paintings reveal an artist at the peak of his powers, one able to capture the constantly changing relationship of sea and sunlight using subtle restrained tones and skilful brushwork; one whose work is driven by a passionate love of the sea, especially the Black Sea on whose shores he grew up.  One can hear the waves in the paintings, sense their power, and be drawn into a world of beauty, seclusion and intimacy with nature.