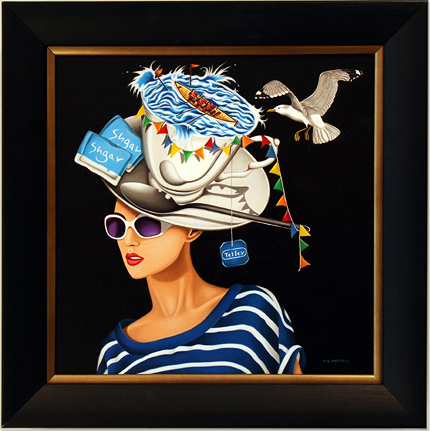 She has recently completed a catalogue of oil paintings concerning the struggle & decline of the Scottish Fishing Industry. Her work focuses on the national coastal communities, now turned to tourism to aid their growth, prosperity and local employment.

Many of Marie's works are also inspired by memories from her childhood, such as trips to the seaside, colourful sweets, fairground amusements and visits to her grandparents. Such memories are incorporated in figurative form to create a visual self-portrait comprised of past moments and treasured memories.

Her oil paintings are influenced by the Dutch Still Life painters of the 17th Century: painters such as Pieter Claesz, Willem Kalf and contemporary artists like Scottish-born painter Joyce Cairns and American photo-realist painter Ralph Goings.

Marie uses the style method of a dark, almost black background, frequently used by the Dutch still life painters. This technique accentuates the imagery in the foreground, bringing exuberance to the painted still life work.

This can also be observed in her painting “Siren”, where due to the dark background, the skin of the female model and the beachcombed items appear to shimmer & glow with a natural intensity & luminosity.

From Dundee to London Marie has held numerous solo and group exhibitions, including an exhibition at The Royal Scottish Academy, Edinburgh. Her works are held in many public and private collections in the UK, Ireland and Australia including the St Andrews Museum collection. She has also been featured in many national and local publications.

No artworks by Marie Louise Wrightson are currently available. Please contact the gallery for future availability.

No artworks from Marie Louise Wrightson are currently available, please contact the gallery for future availability