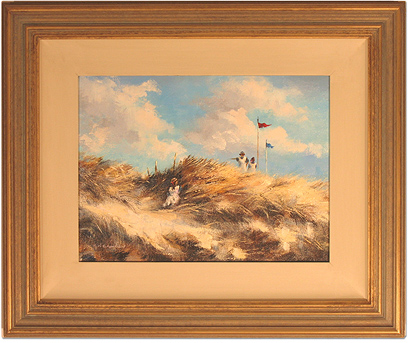 Maurice William Crawshaw was born in 1947 in the city of Sheffield and began his working life in the steel works. His talent for sketching saw him leave Sheffield and head for Norfolk to pursue a career as a photographer and commercial artist. It was in Norfolk where he was introduced to oils and the works of the impressionists, studying them all extensively, he was inspired to produce oil paintings himself favouring the impressionists style and colouration.

Maurice’s paintings convey an amazing sense of expanse and distance coupled with expressive texturing of foreground and detail, giving in all a tremendous depth to his work.

Some years ago Maurice came across, by way of an old publication, the art of candlesmoke painting. This was a pastime that the Victorians used for entertainment purposes, predominately for children on china plates. The medium fascinated him and having fashioned all his own tools and after years of experimenting and developing his technique, he started to produce exquisite works of art using only the smoke from a candle on a canvas of glass, porcelain or mother of pearl. The ethereal quality of the smoke produces a magical effect.

Maurice is now an elected member of Royal Society of Miniature Painters (RSM) and the Society of Limners (SLm) gaining honourable mentions with both societies.

No artworks from Maurice Crawshaw are currently available, please contact the gallery for future availability