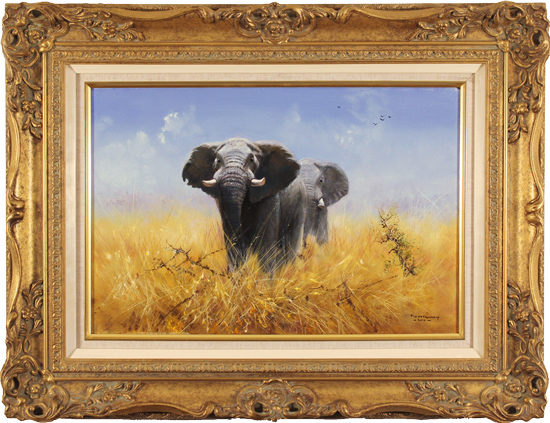 Pip is a self taught professional wildlife artist with an international reputation. He was the ‘Artist in Residence’ at Marwell Zoological Park in Hampshire for over ten years and is the founder and Chairman of ‘Marwell International Wildlife Art Society’ (MIWAS), the largest wildlife art society in Europe.

For many years, Pip has led camping safaris for artists and photographers into some of the remotest game reserves in Africa. In March 2010, his group of seventeen travelled through the Ruaha and Rufiji National Parks in Southern Tanzania. In October 2010, he took a group of twelve to the Okavango Delta and Chobe National Park in Northern Botswana.

More recently in March 2012, his group of adventurers joined the acclaimed wildlife photographers Daryl and Sharna Balfour in Kenya’s Maasai Mara. Pip has also travelled extensively and has lived in both Central America and the Far East.

Nearly thirty of Pip’s paintings have been successfully sold by Christie’s and Sotheby’s at their international auctions, with some achieving record prices. Many of his paintings have been reproduced as fine art limited editions by De Montfort Fine Art and Rosenstiel's and his work is now published in the UK by Sally Mitchell Fine Art. Pip is represented in the USA by Applejack Licensing.

In 2003, he filmed and presented on location at Marwell Zoological Park an hour long instructional painting video and DVD for Teaching Art Ltd, the largest producer of art tutorial DVDs in the UK. In 2004, Pip was filmed on  location in Kenya and at Marwell Zoological Park by Meridian Television for their highly successful television series, ‘A Brush with The Wild’. The programme was presented by Anneka Rice and featured Pip teaching celebrities such as Christine Hamilton, Jenny Éclair, Lesley Joseph and Nerys Hughes how to paint wildlife.

Pip is an elected member of the prestigious ‘Society of Animal Artists’ in New York, USA, a member of ‘Artists For Conservation’ in Canada, a member of the UK Fine Art Trade Guild and was previously on the Advisory Panel of the UK ‘Artists and Illustrators’ magazine. He is also one of the presiding judges for the ‘BBC Wildlife Artist of the Year’ competition.

No artworks from Pip McGarry are currently available, please contact the gallery for future availability