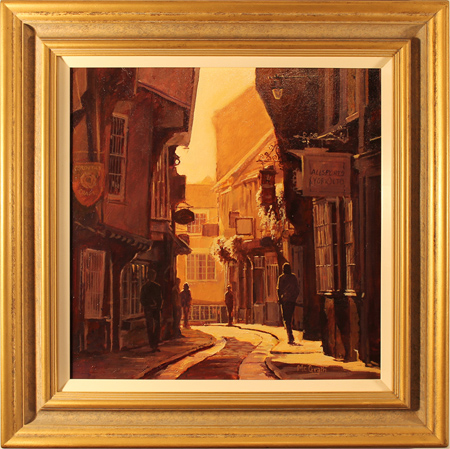 Stephen’s formative years were spent in the delightful coastal village of Emsworth, on the Hampshire-Sussex borders. He spent his time observing and sketching local wildlife and maritime scenes, initiating him into the world of fine art. His accomplished draughtsmanship secured him a place at the Sussex College of Art, where he studied graphics and illustration.  He subsequently spent many successful years in the industry; however, he found that his true interests extended beyond his office walls.

He eventually decided to take the plunge and turn his life-long love of painting into his chosen profession. Moving to an idyllic small cottage set in a river valley in the heart of the West Country, Stephen began his life as a full-time artist. The art world is richer as a result, and only time will allow his full potential to be realized.

Stephen’s work is characterised by a combination of his authentic precision and unique artistic interpretation. He painstakingly and meticulously researches his subjects before any paint touches his canvases, ensuring their technical accuracy. He furthermore gives distinction to his work with his own personal translation of lighting and atmosphere. Few artists are capable of achieving such accuracy whilst simultaneously retaining their own artistic identity.

His paintings can be found in leading galleries and private collections, both in the UK and overseas.

No artworks from Stephen McGrath are currently available, please contact the gallery for future availability