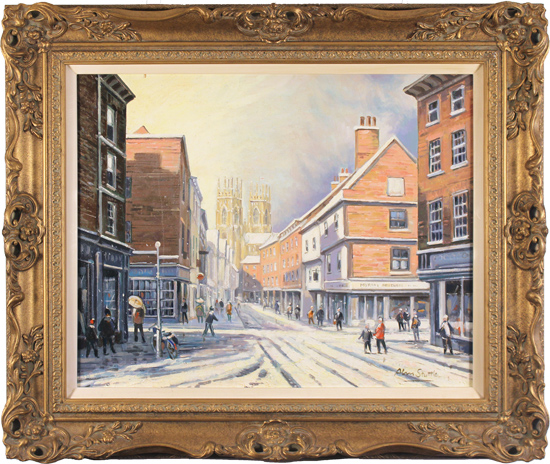 After three years at the Stoke on Trent College of Art, Alan's promising talents were recognised, when at 18, he was accepted by the Royal College of Art, London. Returning to his native Cheshire after three years, he taught at a secondary school before accepting a lectureship at South Cheshire Central College of Art, Crewe where he remained for six years. After a series of one man exhibitions he retired from teaching at the age of 29 and went to California where he won three prizes for his paintings and thus started on his career as a professional artist.

In 1972 Alan moved to York and opened his own gallery in Micklegate which was used as a base for travelling around the country adding new subjects to his portfolio. After many years of living and working in the city of York, Alan relocated to Scarborough, where he opened a new gallery on North Marine Road in 1988.

Alan has had the pleasure of working with many charities over the years and has now founded his own charity, a bursary for young artists at Huntington Road School, York. In memory of his daughter, Caroline, whose life was prematurely ended in 2002 at the age of 19 whilst on a gap year in Queensland, Australia, the winning student receives £500 to spend on travel & materials.  Over the past 7 years, they have travelled to New York, Italy, France, Spain, Canada & South Africa, each bring back a painting for the art department.

After the tragedy Alan wrote an account of his experience in the format of a diary describing the first 100 days of a father’s mourning. Titled 'The Bridge' its proceeds benefit the Richard & Caroline Art Fund.