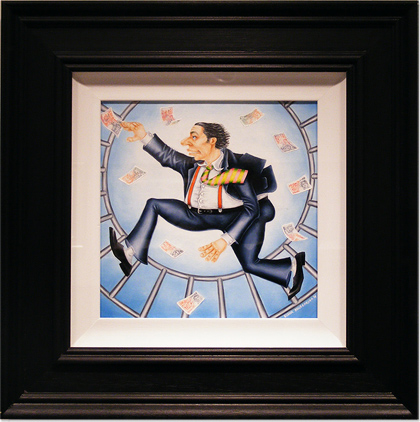 Born in Volgograd (formerly Stalingrad), Russia, in 1966, Elena graduated from an Architectural Institute in 1989 and then moved to Moscow. She worked as an architect until the beginning of Perestroika and then worked as an interior designer. In 1996 Elena moved to Glasgow, UK.

She has been drawing people and capturing their interactions for as long as she can remember. It is that special Russian chaos, the eccentricities and peculiarities of life that inspire her to paint.

Elena’s subjects are usually taken from everyday events, and people often recognise themselves or someone they know in her characters. She is happy if her paintings can raise a smile, even though some of her works imply the absurd and are without particular cheer. Elena presents subjects that are exaggerated, sentimental, and always filled with emotions; a trait she sees all Russians as being guided by.

Elena’s everyday characters offer a recognisable yet grotesque form, crafted to show one thing, but mimicking another. Elena comments,

“With life, things are not always the way they seem. I want to provoke a comment, a reaction, and an emotion. I am not interested in creating just "something" in the frame. I want to make you smile.”

Elena Kourenkova is now based in Scotland and has exhibited at a variety of venues including: The Royal Glasgow Institute, The Paisley Art Institute and Aspect Prize Annual exhibitions. She is represented by established Scottish and British galleries at the Art Fairs in London, Battersea, Glasgow, Edinburgh, Chelsea, Birmingham. Her art work can also be seen in private and corporate collections throughout the UK, Australia, USA, Germany, Spain, Sweden and Russia. There were a number of articles in local and national press (The Herald, Evening Times, Uptown, Home & Interiors Scotland, Home Style, Home Plus, N01). Her art work recently appeared in the TV Channel 4's Grand Design.

No artworks from Elena Kourenkova are currently available, please contact the gallery for future availability