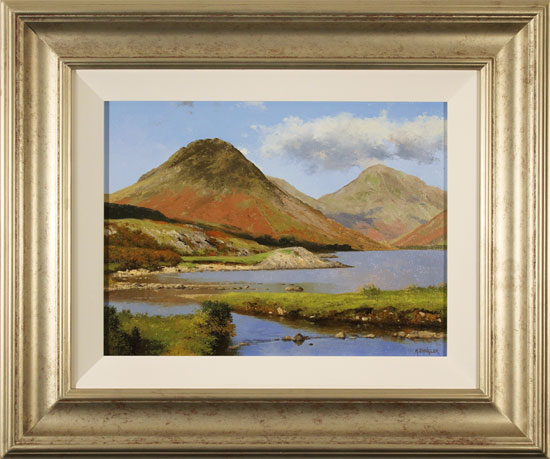 Born in Leicester in 1953, Howard Shingler is a professional artist with over thirty years’ experience. After twelve years working in a foundry office, Howard turned to his passion of painting, and became a full-time artist in 1984. Working exclusively in oils, his oeuvre contains paintings that capture the magnificence of the English countryside, the fine details of still life and accurate depictions of wildlife.

Howard’s landscapes are produced from his own reference material, imbuing his paintings with a quality which could only be gained from a direct experience. Though he travels throughout the country, he is particularly fond of the Lake District. His landscapes fall into two categories: those depicting the natural beauty of today’s English countryside or those unveiling the landscape as it was in Victorian England.

In addition to his landscapes, Shingler is also an accomplished still life and wildlife painter. He has always been renowned for his still life paintings, their rich colours and crisp detail giving them a timeless quality. His wildlife work has also been equally well received, and he has proved himself an adept painter of both British and African wildlife.

There are few artists today with the talent and versatility to produce work of such diverse subject matter. This, paired with his traditional and evocative technique, give Howard’s work a true sense of timelessness. His work is primarily sold in the UK, but has also been exhibited in galleries around the world including the USA, Spain, Australia and the Middle East.