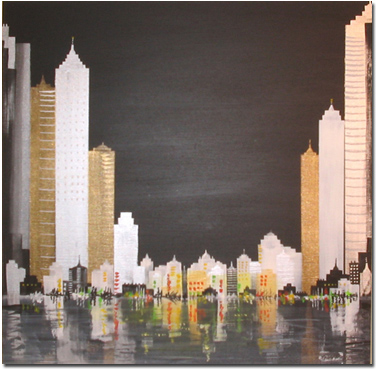 Throughout his life, Keith was involved in a variety of art forms. In school, he was encouraged to draw and paint, and at the age of ten, was asked to paint a mural of London Landmarks around the classroom walls. Even at this young age, he painted posters for various functions in the area, which eventually led to larger projects.

During the war, he won several awards for poster competitions designed to help the war effort. He continued painting during his RAF Service in Egypt, sometimes painting on silk ties and scarves, which was very much in vogue at the time.

Keith never really considered a career as an artist, as he had always had a passion for flower arranging and wanted to be a florist. Though for many years he did freelance floral work, Keith worked full-time as a sales and marketing executive. The role was very artistic and involved working alongside high profile companies to design packaging, products and promotional material, including exhibition projects and stand designs. Alongside this role and his freelance floral work, Keith was also involved in designing and painting stage sets for amateur theatre groups.

By the time Keith became a professional artist in his later years, he had developed a much-loved style all his own that brought him great success. The surrounding countryside of the Yorkshire Dales, where he lived, was an inspiration for much of his work. His contemporary style resonates with collectors around the world, with his work found in private collections in the UK, USA and further afield.