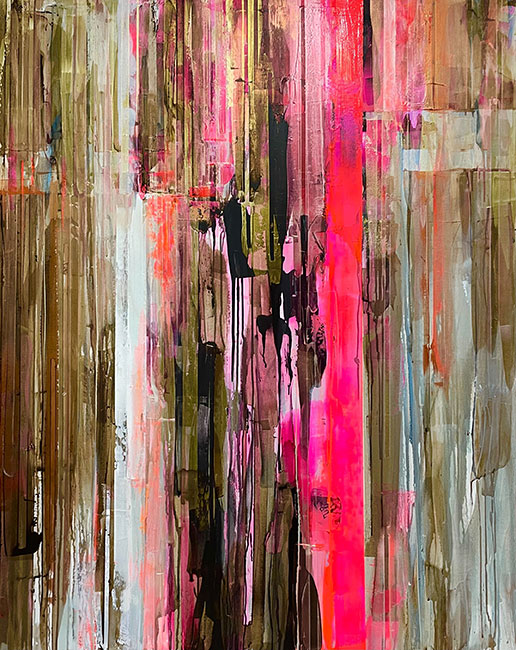 A Yorkshire artist with electric creative flair and bold, unrestrained vision, Louise creates dynamic work that is nothing short of show-stopping. Her abstract paintings hum with tangible energy, hypnotically pulling the viewer into an alternate plane of vivid colour and movement. Combined with their substantial scale, Louise’s paintings are striking statement pieces for any contemporary collection.

Despite only turning to a professional career as an artist in late 2016, Louise has spent most of her adult life in the arts. She initially studied Creative Arts at Nottingham Trent University before graduating with honours in 1993. After graduating, she returning to the north to qualify as a teacher at Bretton Hall College, where she gained her PGCE in Art and Design. For the next 23 years, she worked in various schools in the Bradford district, spending over 20 years as an art teacher at Bradford Grammar School. Though her work was satisfying, in late 2016 she made the bittersweet decision to leave teaching and follow her dream of becoming a professional artist.

Though she initially focused on trees through a more traditional interpretation and technique, Louise now takes a more contemporary approach to her paintings. Her recent work explores the pared down linear aspects of the vertical against the horizonal, with the inclusion of bold brush strokes for movement and an exaggerated colour palette. She also particularly enjoys the use of neon, further adding to the impact of her work.

Louise’s success as an artist has gone from strength to strength as she continues to grow her collector base and attract the attention of the art world. Her work has been specifically sought out and commissioned over the years, particularly for large, open spaces. Today, she lives and works in Illkley, where she plays a vital part in its thriving artistic community.