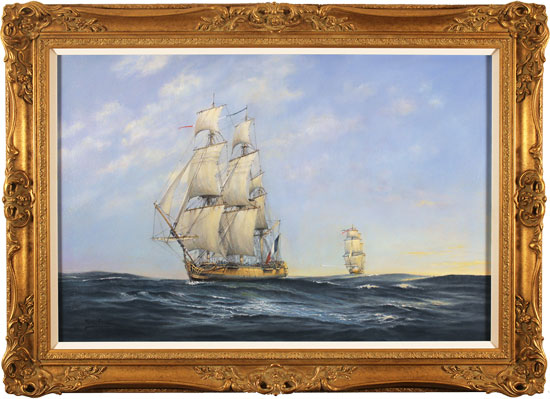 Neil Foggo was born in 1943 in Hawick, a borders town in the South of Scotland. From an early age, he was fascinated with aircraft and ships from the post-war era, cultivating a lifelong passion for painting aviation and maritime subjects.

This enthusiasm led Neil to the opportunity to fly with the Air Training Corps, where he gained his Glider Pilots licence, before later going on to join the Royal Air Force. During a 33 year career, Neil amassed nearly 7,000 hours of flying in the maritime role. Such close association with the powerful forces of both the sea and the air, has enabled him to distil the emotive and essentially transient elements of nature into his artwork. He is one of very few artists who can paint from the direct experience of flying with the Royal Air Force, and experiencing life aboard Royal Navy warships and submarines.

A self-taught artist working mainly in oils, Neil gained early recognition for the power and precision of his work. His paintings hang in national museums and private collections both domestically and overseas, as well as numerous UK and Commonwealth Service Establishments.

Neil’s paintings personify the nostalgic majesty and tradition of post-war aircraft and sea vessels, with a technique both exacting and evocative. He has been a full member of the Guild of Aviation Artists for over 20 years, and exhibits annually at the Mall Galleries in London.