He’s the name on the tip of every contemporary art collector’s tongue. The familiar face to the most distinguished art prize judges in the country. Lover of Manchester, plein air painting, Edward Hopper and Triumph motorcycles, Michael John Ashcroft is without a doubt one of the most exciting and fascinating artists I have ever met. A traditional painter with a contemporary edge, Michael is sending shockwaves through the contemporary art world, and is quickly building up a reputation for himself as one of the country’s most collectible, up-and-coming artists.

Though he was always interested in all things ‘arty’, had it not been for a cruel, albeit poetic twist of fate, Michael might never have become the artist he is today. “In 1998 I was diagnosed with a brain tumour. It turned out to be benign, but it was a massive shock and it took me a long time to get over the operation. When I was in the hospital recovering, I saw my reflection in the window—one side of my face in darkness and the other in light. I saw my future there and then. It was quite a clear moment; I wanted to become an artist and now was the time.”

Leaving his career in engineering behind, Michael took steps to professionally pursue his love of painting. In 1999, he returned to college where he completed his A-level in Fine Art; but it was his own studies of the masters, visits to galleries and life drawing classes which Michael credits with his artistic education. He found life drawing to be particularly influential, and as a result, continues to do so regularly to ensure he keeps developing his technique. “Sketching is the foundation of any good painting.  Without life drawing classes I wouldn’t be where I am today. They train your eye to see what you are drawing, not what you think you are drawing. I can tell when I haven’t been drawing enough as it shows in my painting.”

When not attending life drawing classes, Michael can usually be found in his studio, hard at work. “I have a strict routine, which I think you need when you work for yourself. I get up in the morning, make a cup of tea and make sure I’m in the studio by 9am. More often than not, I will leave a painting on the easel ready to go back to from the day before; it just makes it easier to start. I always listen to music, which helps me focus on what I’m doing. I will have half an hour for dinner, and then generally work to around 5pm, sometimes later depending on what I am on with. If I’m painting outdoors I don’t need motivating—it’s always exciting!!”

Both Michael and his collectors have come to relish these days of painting outdoors, or ‘plein air painting’. Armed with his paint, palette knife and brushes, Michael is known to take his Triumph motorcycle out into the landscape or perhaps to one of his favourite pubs for an afternoon of plein air painting—occasionally even finishing the day with a pint before heading home. Michael’s beautifully contemporary approach to plein air painting allows him to infuse a sense of raw, emotional authenticity into his paintings; a remarkable feature that has quickly become a hallmark of his work. 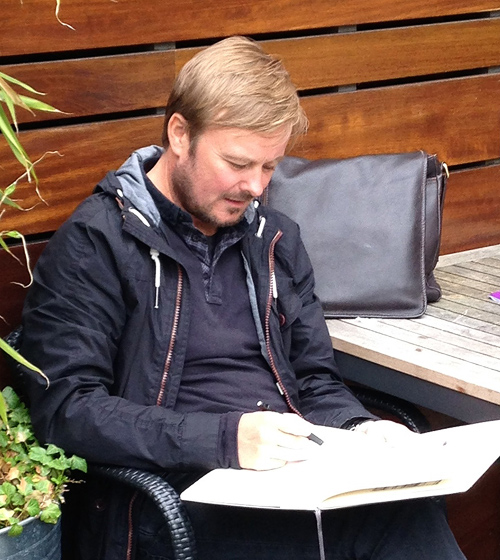 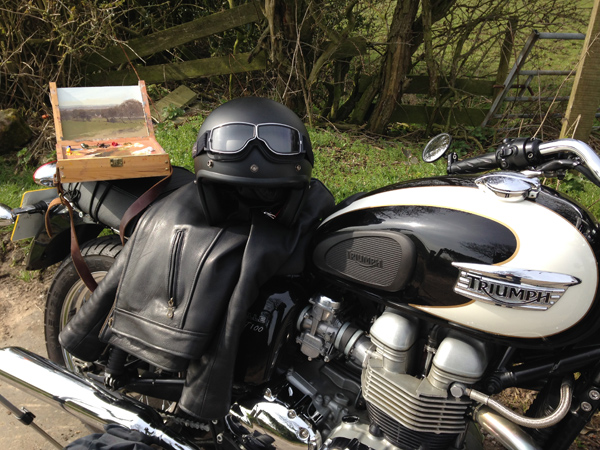 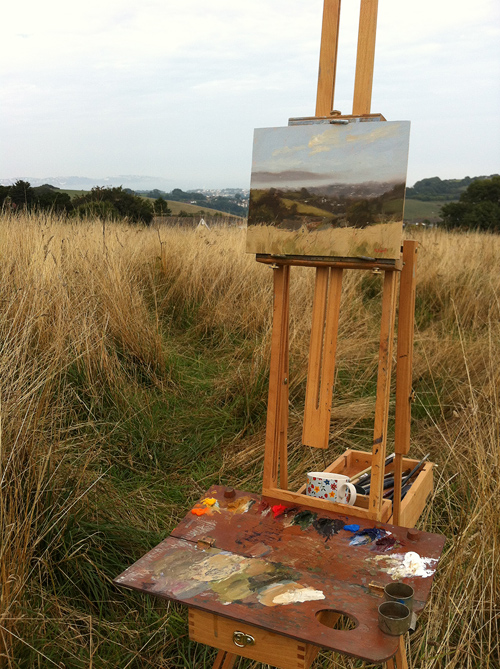 It is this strong sense of emotional authenticity that is one of the things I find most striking. Quite simply, when looking at Michael’s paintings, one not only believes what he feels, but actually feels what he feels. And not only the sensory elements such as the graze of a hill-top breeze or the radiating heat of a baking pavement in mid-summer; one becomes fully absorbed in Michael’s emotional experience as well. The excitement of a bustling Manchester street, the contentment of a familiar, no-frills pub or the sense of weightless calm found in the natural landscape are just a few of the sensations aroused by Michael’s work.

Considering the range of subjects and locations Michael paints, such comprehensive accomplishment is truly an astounding feat. But his method for achieving this feat is ingeniously straightforward: “I always try and paint from the heart and paint things that I love.  It might be a sunlit field in Yorkshire or an old pub in Manchester; so long as I feel a connection, it will show in the painting.”

Michael’s passion, ambitious attitude and disciplined approach are clearly paying off. Recently his work was accepted to one of the most prestigious and selective exhibitions in the country: The Royal Academy’s Summer Exhibition. “It was absolutely wonderful to be accepted into the Summer Exhibition. There weren’t many traditional plein air paintings in the show, so to get one in was fantastic.  I went down to London for the church service for all the accepted artists, and I couldn’t help but think about how Constable and Turner had probably sat here and done the very same thing.”

As down-to-earth and humble as he may be, the Summer Exhibition was just one of Michael’s long lists of accomplishments. The gallery receives regular updates from Michael about the various exhibitions and competitions to which he has submitted work—and it is equally as regular to receive a follow-up saying he has been successful. But despite his hard work and ambition, Michael manages to keep his artistic growth refreshingly organic. “I have tried not to worry too much about evolving as I think it just happens naturally.  If you are visiting galleries and speaking with other artists, you automatically soak up what they say or what you see. The trick is to disregard the stuff you don’t need and take on board what you do. That’s how to evolve as an artist.”

There’s no doubt Michael’s evolution will be watched with a close eye by collectors, professionals and his contemporaries alike. With so much accomplishment already under his belt and still so much ahead of him, Michael is the kind of artist that grabs your attention and holds it over the course of a lifetime. I think I speak for all his collectors when I say that Michael John Ashcroft is a name the art world will remember for a long time to come.

His many accomplishments and exhibitions include:

Elected a member of the Manchester Academy of Fine Arts. 2011

His press and television features include: