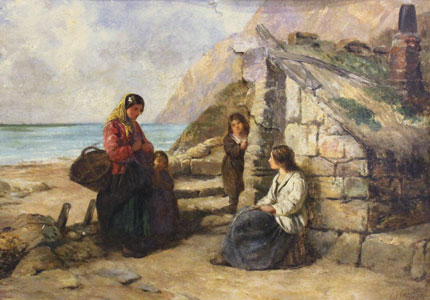 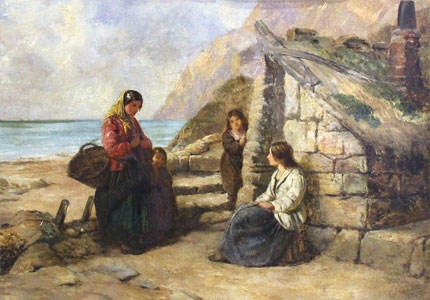 Born in 1815, British artist Edward John Corbett, is best known for his sensitive and intuitive depictions of children, and Romantic scenes of rural-coastal life.

The artist’s use of rich, bold colours, idealised rural scenes and the sensual innocence of his female subjects were no doubt influenced by the emerging Pre-Raphaelite Brotherhood, founded in 1848. The Pre-Raphaelite’s viewed themselves as a reforming movement, consciously harking back to the Classicalism practised in 15th century Italy, whereby lavish detail, a preoccupation with nature and simply indulging in the aesthetic possibilities of the human form, dominated the artwork produced.

Edward John Corbett’s work especially emphasises the luxurious clothing of his subjects, who appear to be wearing expensive fabrics such as silk, although the people he is depicting would essentially be poor, living lives of hard labour in agricultural or livestock farming. Edward uses the clothing of his subjects as a metaphor, for a richness of spirit, as he idealises country life outside of the modernity and pollution of towns and cities. In doing so, the artist is shown to share one of the essential and founding principles of the Pre-Raphaelite Brotherhood, that of a reverence for nature.

Edward died in 1899. His paintings continue to excite and entrance buyers from around the world.

This restoration consisted of a full clean, retouch and revarnish.