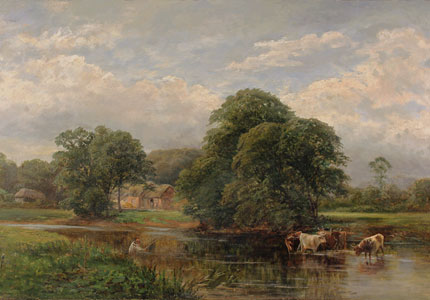 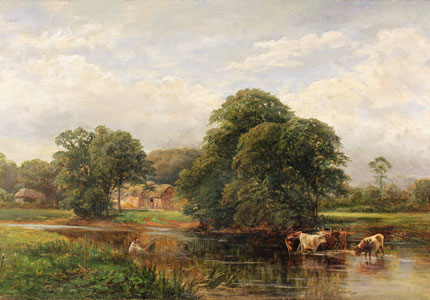 Henry Hadfield Cubley was born in Newark, Nottinghamshire in 1858. Henry was the nephew of William Cubley, an influential figure in Henry’s life, as not only was William a teacher and a previous Mayor of Newark, but also an accomplished landscape artist.

Henry became a successful artist in his own right, moving to Matlock Bath, Derbyshire in 1888, and going on to exhibit at the Birmingham Salon and the Royal Academy on numerous occasions. Henry’s vibrant country scenes are instantly recognizable for their atmospheric quality, as well as the artist’s sensitively rendered depictions of highland cattle.

Henry was often drawn to the rugged beauty of Wales and Scotland’s mountainous regions, which provided inspiration for some of his most sought after works. The artist’s last exhibition at the Royal Academy was in 1902, after which he continued to paint and immerse himself in the landscapes he loved up until his death, in 1934.

Henry’s work continues to surface at auctions across the country, being highly regarded by collectors and critics of landscape paintings.

This restoration was brought back to life with an extensive clean, retouch and revarnish.