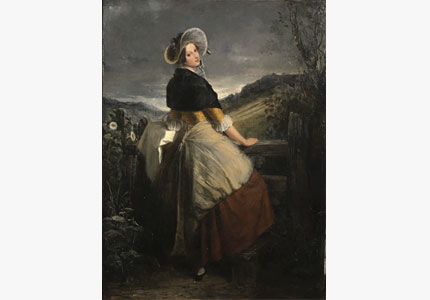 Born in Pimlico, London in 1804, Richard Redgrave began his working life at his father’s manufacturing firm, where he honed his drawing skills. In 1930, Richard began to make his living teaching art, and henceforth forged a remarkable career, becoming a leading figure in the reformation of art education in Great Britain.

Among the many prestigious positions Richard held throughout his career, he was Headmaster of the Government School of Design, Inspector General for art at the government body of Science and Art, and the first Keeper of Paintings at the South Kensington Museum.

Although Richard produced many landscape paintings, he is best known for his genre paintings, depicting the poverty and social concerns of 19th century London, causes he became sympathetic to after a short spell as a rent collector.

Richard Redgrave’s genre paintings are striking for their combination of idealised female beauty, narrative and energy, alongside an unflinching dedication to social and political commentary. Today his work is both widely collected and cherished, not only in respect of his artistic talents, but of his pioneering efforts in art education and his concern-raising depictions of poverty.

This restoration benefitted from a full clean, retouch and frame restoration.